Get happy listening to Shonen Knife 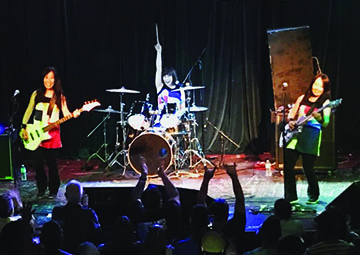 Shonen Knife is a pop rock/alternative band that formed in Osaka, Japan, in 1981. They are currently on a U.S. tour.

Naoko Yamano, the lead vocalist and guitarist, recently spoke with the Hawkeye about the band.

Shonen Knife’s newest release is called “ALIVE! in Osaka.” It is a live CD/DVD set with songs spanning their career. Older songs like “Bear up Bison,” “Twist Barbie” and “Riding on the Rocket” are mixed in with newer songs like “Rock ‘n’ roll T-shirt” and “Jump into the New World” from their 2016 record, “Adventure.”

When asked about her current favorite song to perform, Yamano says, “Now I like to play ‘All You Can Eat’ from our album Pop Tune.”

She goes on to say there is a call and response part of the song that get the audience involved, which makes it fun to play live.

When this tour ends, Yamano plans to write new songs and record a new record. She hopes to be able to release it sometime next year.

While on tour, members of Shonen Knife keep journals of their adventures. Yamano is quick to mention the alligator they saw last year when they were in Tampa. All three band members posted pictures of the alligator at http://www.shonenknife.net/tour_blog_2017us.html. Yamano says last year was the first time the band played in Tampa and Orlando.

Yamano says she writes everything down while on tour so she will not forget the good times. She is also very positive about her experiences and only talks about the good things that happen on tour when relating stories.

Yamano remembers her roots in music and the help other bands and press gave Shonen Knife.  She continues the tradition today. She says she really likes a band called Extruders. They are an underground band from Japan, and Yamano is quick to point out that their music is available on Apple Music.

When asked about advice she has for HCC students, Yamano says, “You can get happy if you listen to Shonen Knife songs.”

You can find their music on Spotify and Youtube. You can also buy their latest albums directly from their record label at https://www.goodcharamel.com/store/c2/SHONEN_KNIFE.html.