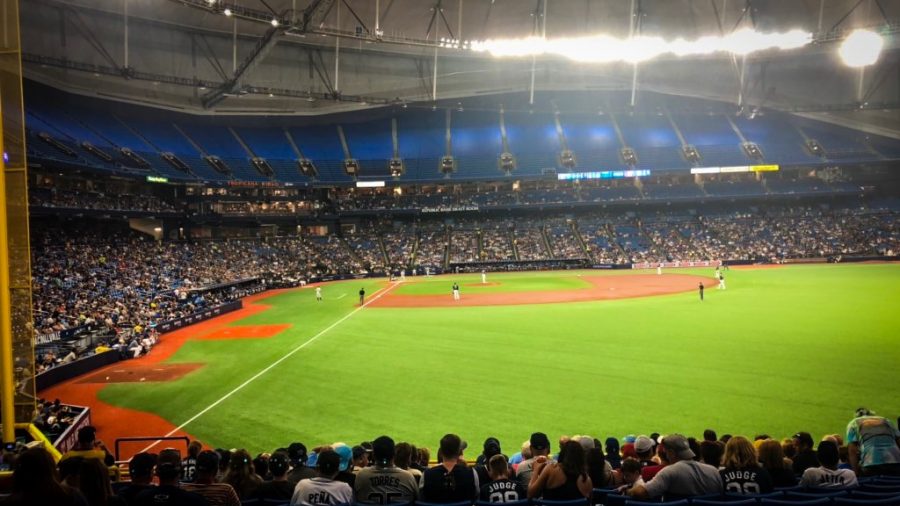 The wait for tickets. The fresh aroma of hot dogs and cola when you walk through the gates. The fans decked out in white and several shades of blue.

The long lines of fans waiting to buy hefty buckets of popcorn that are as high as the Eiffel Tower. The green AstroTurf decorated with red Georgia clay and white stripes of paint stretching from home plate to each foul pole.

These components make up the experience at Tropicana Field. No matter how many times, a season ticket holder or team owner goes to a game these components evoke joy.

While those components do not collectively make up the sole reason why fans go to games, it does make the ever-eccentric stadium one of the bay area’s finest attractions.

Lifelong Rays fan Carol Kummelman stated, “I love having the team here in St. Petersburg. Sure, it might be a long drive for some fans, but this is one of the best stadiums in the league. There are no weather delays, and if we hit one of the circles in the ceiling, then that is a home run.”

After a whimsical seventh-inning stretch, Danny Flowers, who is a casual sports fan shared, “Tropicana Field is a great venue for food and merchandise. I don’t think this a great place for a baseball game because it feels inorganic. I am not the biggest sports fan. But who in the world wants to watch baseball in the air-condition with huge ceiling circles that can determine the outcome of a game? It’s pathetic. Those who have cemented their legacy in this game would not approve. Baseball is a game meant for the elements. I would not mind having to sit in the summer sun or a weather delay.”

Many games have been determined by the lettered rings known as catwalks. Tropicana Field is the only venue in the league which such quirky rings that turn the tide.

They are leading the American League’s wild-card race and are inching closer to the finish line with no one in front of them. If they were in the National League’s central division or wild card race, they’d lead it by a hefty margin. If spectators can’t agree on how nice a park is, they can conclude their hometown team isn’t so shabby.