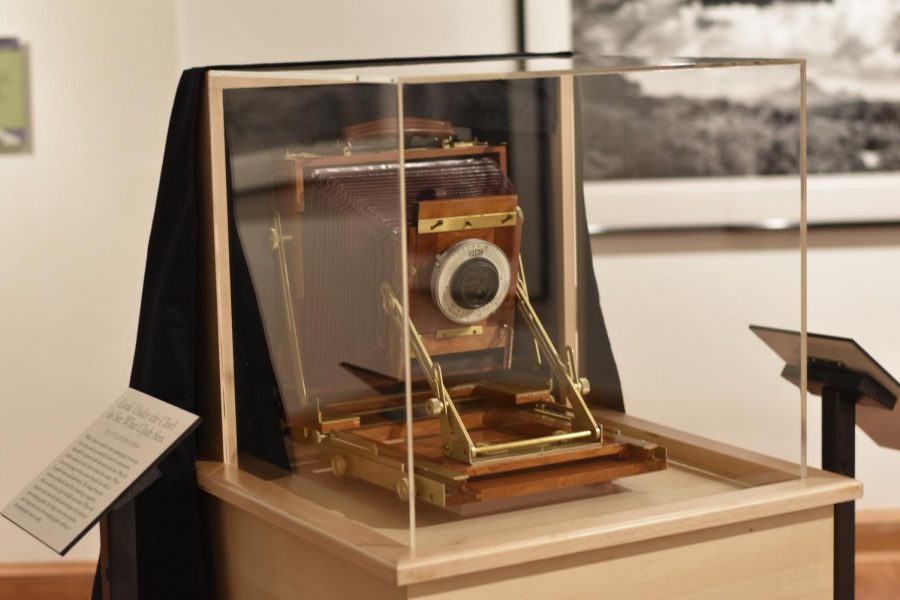 Clyde Butcher is an undeniably talented photographer that captures nature at its best. Dedicated to his work, he will wait for hours in hot, uncomfortable, dangerous, and damp conditions to get the picture he desires.

The mesmerizing black and white canvases that hang on the galleries walls are living proof of the challenges that this man has conquered. A common question one might ask Mr. Butcher is why are the majority of his photos black and white?

Having been inspired by an Ansel Adams exhibit at Yosemite national park in 1963, he decided to take this style of photos for his own. He even sold them at art festivals making a minimum profit. Although his photos are grayscale, Butcher is anything but dull. There was even a time where he had vivid artworks bursting with colors, but now he focuses on his signature black and white.

Two of the eye-catching artworks showcased at the HCC gallery were Vista de alto de Naranjo and Salto el Rocio 1. For viewers unfamiliar with Spanish, each photo is translated and contains the text of personal quotes from Clyde Butcher and the risks he engaged in to get the perfect picture.

The 1st photo, Vista de alto de Naranjo, translates to a “high view of Naranjo.” The photo has the scenery of a beautiful sky, magnificent mountains, and trees that seem to be swaying in the wind, even though the photo is still.

A view like this would surely help one find their inner zen. Butcher describes how they road up a tricky hill in an old Russian dump truck. He states it was worth it because the higher the altitude, the more beautiful the scenery became. In the caption of the picture he describes what he saw, “At the top, we were amazed at the wonderful view over the mountains, with the clouds rolling in and out.” It must’ve been a sight to see, but taking pictures from the high ground could not be a simple task.

Setting up equipment with his crew, he starts clicking away. Even when it began to rain, they stood there waiting for the perfect shot as their guide kindly offered to hold up the umbrella.

The photo features a beautiful waterfall as it flows over rocks and other unique aspects of nature. Traveling with a large group of American environmentalists, they were given the option to explore several different things. Butcher states, “… we bumped and backfired our way to this waterfall rarely seen by tourists.” That was probably because most tourists don’t think a view is worth possible death. Which is why we need people like Clyde Butcher to photograph these sites, so that we can experience this beauty in a safe photographic form.

The photos reveal how devoted Butcher is to his artwork.

Butcher is a daredevil photographer. He has been called the next Ansel Adams by popular photography magazines and has received humanitarian awards for actions benefiting his community.

His exotic photos have earned him recognition as one of the most talented landscape photographers in America. It is no debate that he is gifted and his work preserves the beauty of our natural landscapes. One might ask how he does this, and his answer is simple, “patience and perseverance.”

Waiting hours for the light to shine just right and the clouds to align perfectly, he carries 120-pounds of equipment through the dangerous mysteries of Mother Nature to get the shots he wants.

A man so committed to recording precious landscapes throughout the world should be appreciated for his efforts. If it wasn’t for artists like Clyde Butcher, most of us would never know the breathtaking scenery that hides within the cracks of our beautiful world.