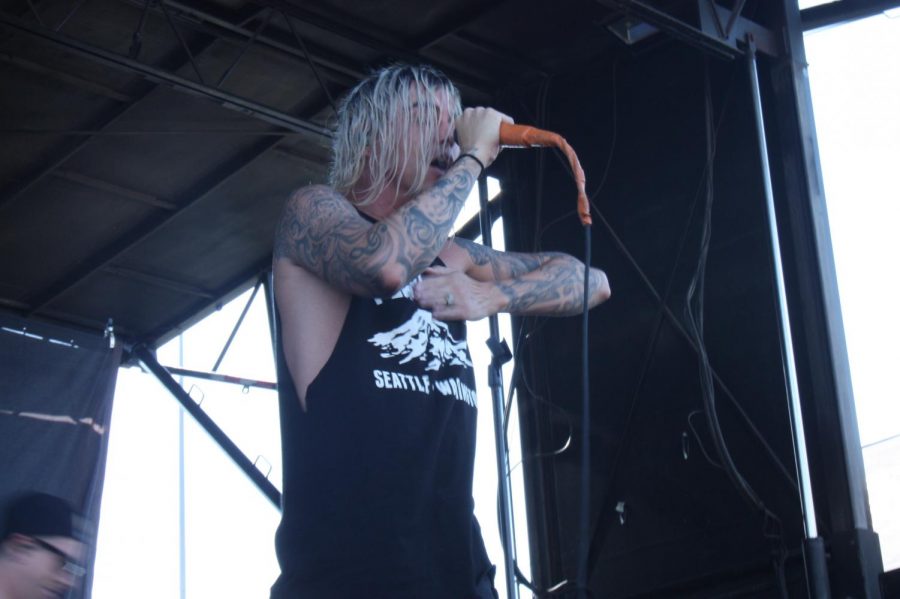 Kellin Quinn of Sleeping with Sirens, one of many bands set to perform at Welcome to Rockville 2020.

This year marks significant changes for Welcome to Rockville. The tenth year of the festival brings a change that has surprised many, as Danny Wimmer Presents announced that the festival is moving from Jacksonville to Daytona Beach; the event will take place from May 8 through May 10.

In the past, Rockville had been held at Metropolitan Park, but due to construction, it was moved. Since there were no viable options large enough, the festival is moving to Daytona International Speedway. The announcement of the move has sparked a lot of talk on the internet, especially in many Welcome to Rockville groups on Facebook and Reddit.  Some people welcome the change because the venue is closer to where they live. Those who appear to oppose the move seem to be Jacksonville residents, who had not traveled far for the event in the past.  Fans in the Tampa area, however, are excited to have a shorter drive. One aspect of the venue being appreciated is its size. The Speedway can accommodate many more people than Metropolitan Park.

The venue’s size is beneficial to another change for Rockville. For the first time in Rockville’s history, Metallica is headlining. What makes Metallica’s presence more historical is that they are playing different sets on two nights, Friday and Sunday. Never in the festival’s history has a band played two sets on one of the major stages. Legendary Jacksonville band Lynyrd Skynyrd will headline on Saturday as part of their farewell tour.

A total of 52 bands will play over the three days. Some of them, like Disturbed, The Offspring, Anthrax, Alter Bridge, Fire from the Gods, Bad Wolves, Lamb of God and Joyous Wolf, have played Rockville in the past. Bands making their Welcome to Rockville debut include Social Distortion, Rancid, Dropkick Murphys, the Hu (a Mongolian act that has been garnering a lot of buzz with their unique sound), Sleeping with Sirens, Agnostic Front and Stitched Up Heart.

As in the past, Danny Wimmer Presents is bringing some acts that do not really fit in the rock and metal genre. One of the more significant non-rock acts this year is Florida rapper Ghostmane. Some will say he fits in the rock/metal sphere because he started by playing in hardcore and doom metal bands. Welcome to Rockville is a chance to see up-and-coming bands playing along with heavy hitters. It is also sometimes the only way to see smaller bands in a large venue.

At their 2018 Rockville debut, Joyous Wolf said, “We hope that when people come to see us that they walk away with something more than just seeing a show on a hot day.” Joyous Wolf put on an energetic show where band members jump into the crowd and run around with the audience members.

Many people who attend Rockville love the activities away from the main stages. Zippo usually sponsors a booth where they allow people to see some of the bands in an intimate, acoustic setting. Members of the Welcome to Rockville –Rockvillains Facebook group talk about how good the Island Noodles are. Others go to the f.y.e. Experience tent or the Monster area to meet band members.

Tickets have been selling well, so make sure to get yours as soon as you can. Single-day, two-day, and weekend passes are all available at https://welcometorockvillefestival.com/.