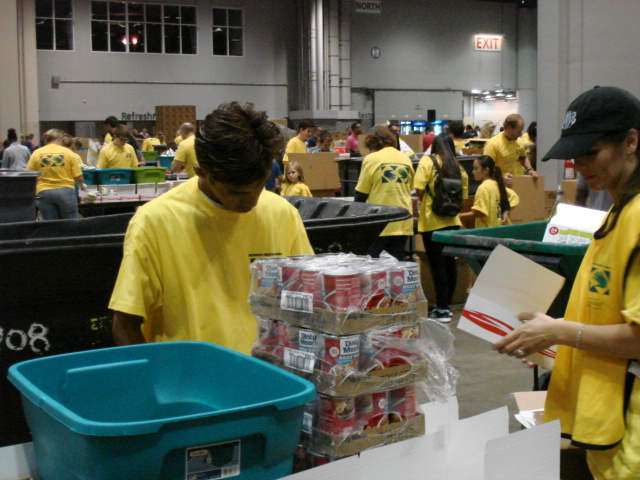 Although the 2017 hurricane season has come to a close, it was a rough one for Florida and the Caribbean. Irma and Maria devastated the area. Not content to sit and do nothing, people from the Tampa Bay offered whatever assistance they could. There were many opportunities for people to help. Jena Lee Stansell, a student on the Plant City campus, volunteered to help send food to those in Puerto Rico.

For three weeks in October, an organization called Feeding Children Everywhere coordinated with FEMA to help feed people in Puerto Rico after the hurricanes. They set up at the Orange County Convention Center in Orlando. People from all over packaged “food kits” to send over the next few months. Their goal was to package between 4 and 5 million kits during the three weeks. Stansell went with her church organization to participate.

Stansell says, “We took a bus load and a couple of cars full of people and headed to Orlando to meet with other people” to help. Stansell wanted to go because she thinks “it’s important to help others in need and [she felt] a sense of urgency and compassion for these people who are without right now. [She] couldn’t imagine [herself] in that same situation.”

As she left the experience, Stansell says she “felt a sense of calmness and a sense of completion and joy. It was nice to work with other people who all had the same feelings of compassion for people.” She says she felt like her efforts made a difference.

While the Feeding Children Everywhere event was huge, there are opportunities for the HCC community to help in many ways. Just on the Plant City campus, there have been various initiatives to help others. There was a food drive for the local food bank and a campaign for animals affected by the hurricanes. Currently, there is toy drive and donation drive for local homeless shelters and food kitchens. Stansell notes that “helping people can be done on a local basis; it doesn’t always have to be some grand gesture. If you feel the sense of wanting to help somebody, follow that feeling and just go do it. Don’t hesitate. Just act upon those feelings. Watch somebody’s life change for the better because you took the time to do that.”

Find more information on how to help throughout campus or at feedingchildreneverywhere.com. As Stansell, says, “Go help; go serve; it’s great!”