A moment to connect 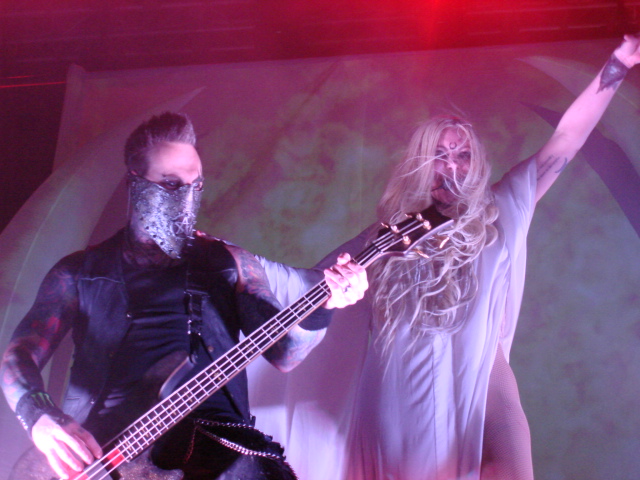 Travis Johnson and Maria Brink mesmerize fans performing as In This Moment.

It may have been cold that night, but the fans came to be warmed by music. Opening acts Ded, and P.O.D. got people excited for In This Moment. From the “moment” the band members came out on stage, people were mesmerized by the show. Brink came out from behind the curtain as the band started playing the title track from their 2012 Gold-certified album, “Blood”. The band performed songs from their latest three albums. Half of the songs come from last summer’s “Ritual”. One song they performed is their haunting cover of “In the Air Tonight” by Phil Collins. Although Brink wears multiple costumes, some of which hide her face, she is still able to engage the audience.

Brink smiles at and points to audience members as she sings and talks between songs. She tells the audience how much she loves them and how much they mean to her. Brink says she feels honored by people who are willing to take time out of their night to share the music she loves.

People feel a real connection to her and to her music. Kayla Santos, who attended the Jannus Live show, says, “Music is what keeps me alive and this band has kept me alive for as long as I’ve known them.” She was very excited to get to see and talk to Brink and the band members.

Not content with just playing for people, In This Moment rewards their biggest fans with opportunities to connect personally. Not only do people get to meet Brink and the band after shows, but Brink has a website, www.mariabrinkswonderland.com, where fans can interact on an even more personal level. According to Brink, members “step into my everyday world” and “learn how I manifest myself and my success through learning the power that lies within all of us.” On the site, people have personal profiles with pictures, receive autographed pictures only available to members, and have access to an interactive blog with Brink.

For an encore, In This Moment played the song “Whore”. Brink came out wearing the “dunce cap” she wears in the song’s video.  She then talked about the meaning of the song: “Ugly, stupid, fat, filthy, dirty little whore. You see, this is what I was told, ladies and gentlemen, when I was only a girl…You see this next song, this last song, it is about rising above.” Brink says she uses the song to “turn other people’s hate into something empowering.”

After the song, Brink gave flowers and backstage passes to individual crowd members, and the band members took their final bows before leaving the stage. Robert Birdwell, a fan at the show, said, “It was a wonderful show; I loved it.”

For more information, go to www.inthismomentofficial.com. You can read news, listen to music, watch videos, and buy shirts.

In This Moment is returning to St. Petersburg on Dec. 16, to the Mahaffey Theater with Halestorm and New Years Day.