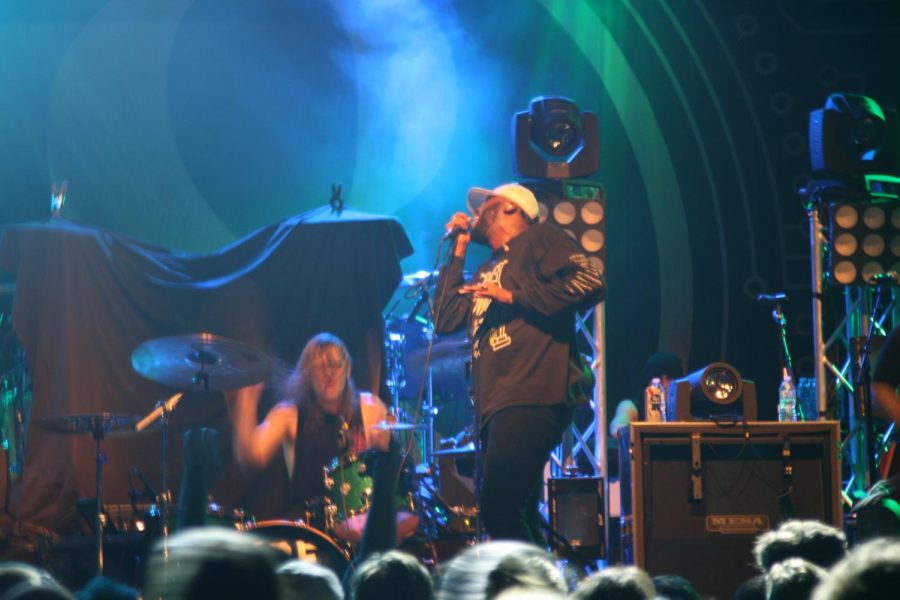 Fire From the Gods onstage

AJ Channer, vocalist for the Austin, Texas, band Fire From The Gods, thinks of himself as the modern-day Prometheus. Although the band had existed for 10 years before he joined, he feels the band’s name is strong and wants to tie it in more to the Greek story. He feels Prometheus bringing fire and jump-starting the human race is a pivotal point in literature and mythology.

Fire From The Gods have been touring with Of Mice & Men, Blessthefall, Cane Hill and MSCW. Their tour brought them to Orlando where Channer spoke about the band and how his life shaped his music.

Channer has lived all over the world. He went to school for four years in Ghana, West Africa. While there, he saw “destitute poverty…a slight middle class…and [great] wealth. Those experiences helped me to shape and write ‘Narrative’ (their latest album).” While living in the U.S., Channer learned what his place is in society and what other people think is his place. He also lived in England, with a more progressive idea of social issues. “There’s always been this underlying sense of institutionalized racism.” All his life, he has been taught to “know thyself and love thyself.” By living all over the world, Channer has learned to love himself for who he is, and for his individuality. It is what he wants to express through heavy music. Fire From The Gods has been that conduit.

For Fire From The Gods, the message supersedes everything. On stage, the band members want to convey a revolution through peace, unity, kindness and understanding. Their tagline on merchandise and what they like to talk about is, “Unite or die.” They do not, however, want people to think they have to choose a side. Channer says we live in a polarizing society where people are told to choose “left or right, gay or straight, black or white and us versus them.” Unite or die says, “Through unity we as a species…we as a society…we as a civilization will be able to survive. If we don’t unite, we’ll continue to kill each other; we’ll continue to die; we’ll continue to tear each other apart.”

Fire From The Gods has a new single and video for the song, “Evolve.” The video is a satirical portrait of different people in society. One is a materialistic woman who only cares how to get more for herself. Two other characters represent the racial discord in the U.S. They argue about whose country it is. The video symbolizes people who keep following the same ideas that don’t work, get the same results. Channer says that some ideas, like civil rights, are great messages, but they get “mixed up and convoluted in the whole rabble.” When someone tries to convey something positive, someone else comes back with a counterpoint. Then it devolves into an argument. The song is about evolving mentally and socially rather than scientifically. “If we start to think better and live better, we can coexist.” Channer says that is what Fire From The Gods is all about.

“Narrative” was released on Rise Records and is available everywhere. The videos are on YouTube, and links to all of the band’s social media can be found at www.firefromthegods.com.