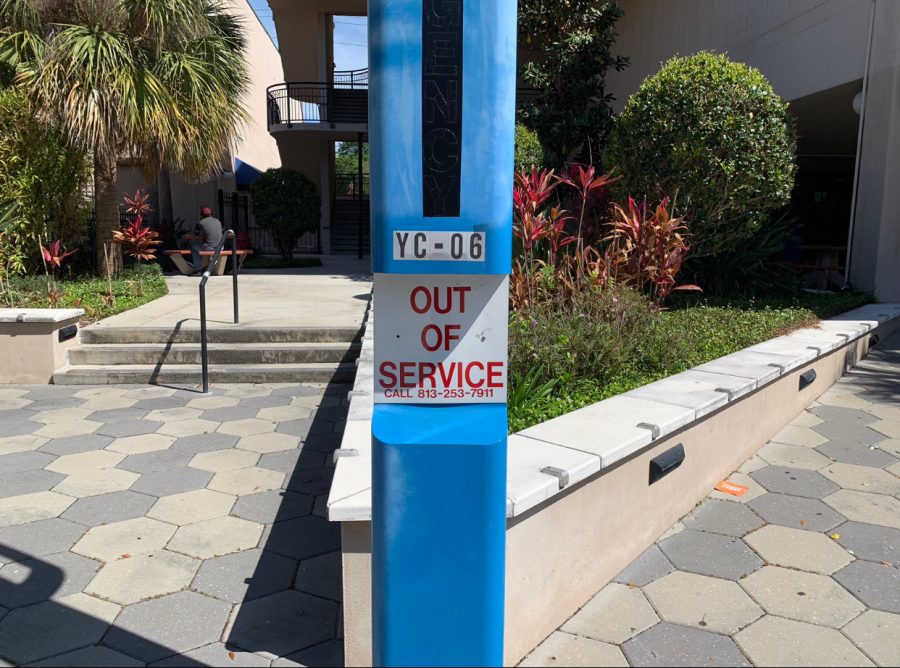 Emma Oliver I The Hawkeye

Emergency Call Boxes remain out of service on campuses.

You’ve probably noticed them all around Ybor City campus … blue emergency call boxes meant to ensure the safety of HCC students, faculty, and staff. The problem is, they are all out of service. This loss of protection is noticed at the Ybor City campus, the only HCC open campus that is surrounded by night­clubs, bars, and a rising homeless population. Stu­dents spoke to The Hawk­eye to share their opinion on the issue.

Deceni Sauzo stated, “I feel like it’s more prevalent to have them here than it is to have them at any other campus because when it’s nighttime and there are people at clubs anything could happen and there could be any drunken driver, you don’t know, this world is crazy, stuff happens on the fly.” The concentration of nightlife in Ybor City is im­mense when students take night classes, some feel more uneasy compared to other campuses.

Another student, Nico­lasa Fernandez, said, “I think especially here in Ybor, they should fix it be­cause there’s a lot of differ­ent people not just students around, so a lot of people need that safety.”

According to a Saint Leo University study “robber­ies, aggravated assault and simple assault have reached an all-time high in Ybor City.” The studies show that the need for these emergen­cy stands ould be at an all-time high. This remains es­pecially true following the presence of a serial killer in nearby Seminole Heights just two years ago.

Last Spring semester, Ja­son Turner, wrote an article on an alternative to these blue emergency call boxes that the college had imple­mented.

The alternative was an app for Androids and iPhones called “Hawk Guardian.”

The problem is it is a little known app, and what happens if your phone can­not access this app or your phone is dead?

Suazo explained a scenar­io, “Say somebody’s phone just died, what if there’s a shooter in a whole other building, and then I’m in this building, OK, well, I can’t call 911.”

The point is clear that a phone is not always going to be there to save you. The college holds a responsibil­ity to its students that they will take every measure to ensure their safety, and it is evident inside classrooms. Each classroom is equipped with an emergency phone.

But what about around campus?

An easy measure the col­lege can take is simply fix­ing the emergency stands that are already on campus. When several public safe­ty officers were asked what is being done to fix them, one didn’t even know they were all out of service; an­other did not want to com­ment on the issue.

But student, Flor Cabrera had something to say, “Stu­dents would probably get mad knowing that they’re not fixing that considering that safety is­sues are more on our mind than other issues, so it’s probably better that they start with that first just to calm down students.” School safety concerns in the United States are at a peak, and HCC students want to know they are safe on their campus.

These emergency stands can serve as a safety outlet in times of crisis, as in a press of a button, help may arrive.

The HCC Public Safety Office did not respond to The Hawkeye on the is­sue of these emergency call boxes. Hopefully, they will hear their student’s opinions and do something about it.

Only time will tell if these stands will be fixed, or if the college will provide an­other safety alternative.