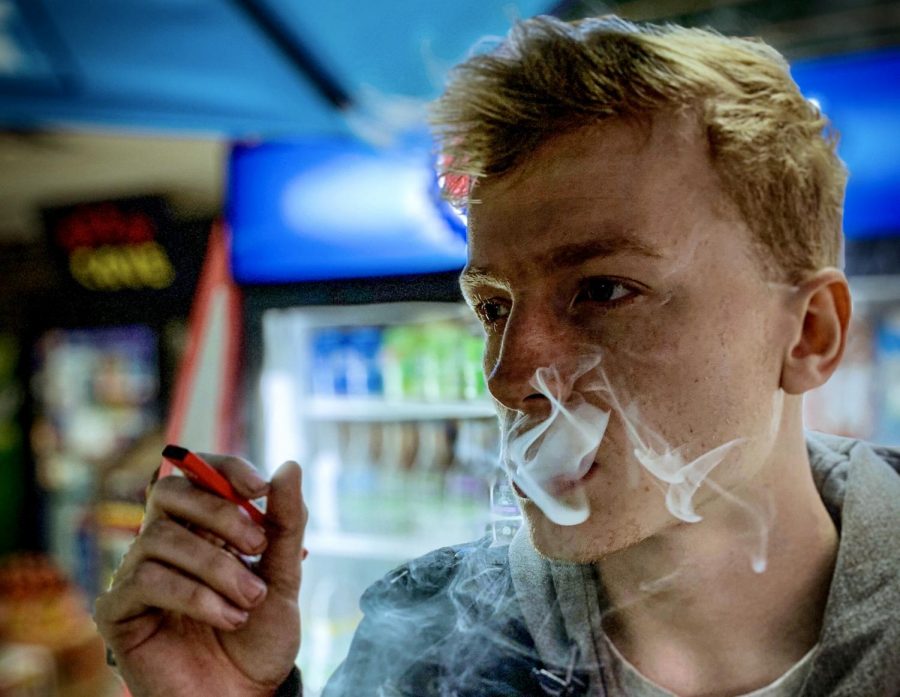 Tessa Chestnut I The Hawkeye

Dalton Cezar, 20, smoking his vape in a local gas station

As the new year approached, several new laws came with it. At the end of 2019, just before the fireworks went off, President Donald Trump signed a new law that stated the new legal age to purchase tobacco products is 21.

On December 20, President Trump signed a 1.4 trillion dollar budget to raise the purchase age to 21.

Concerns over the health risks of vaping are on the rise. The Center for Disease Control has documented an outbreak of lung disease cases.

While the health risks of the cigarette are well known, the dangers of vapes and e-cigarettes were generally unknown until recently.

An outbreak of lung disease occurred shortly after the use of these products rose.

Many feel that if the age limit increases, it would be harder for younger smokers to get their hands on tobacco products. It’s no surprise tobacco distributors target a younger audience.

As the age limit increases, prices for tobacco products will most likely also go up, this being the majority of their customers are now no longer legally allowed to purchase.

“[The] age to use tobacco should be equal to or less than the age you are considered to fight for your country. The government wants to control and leverage big tobacco and pharmaceutical and vaping companies.” Scott Head- ley, 52, said.

Those under 20 feel like they have been treated unjustly and have plenty to say. “I don’t feel like it should be 21, it should be 18, because you can sign up for the military at age 17 to go over and fight a war, but you can’t buy tobacco. If they want an age of equality, it has to be equal for all,” Gavin Donahue, 18, said.

A great deal of said age demographic, also feels there should’ve been a law signed along with it to grandfather those who were already purchasing to continue.

Even though this is a concerning risk to user’s health, most believe it should be a personal decision. These individuals, however, can no longer decide for themselves.

In the past, there have been numerous changes to tobacco laws, many of which have now been forgotten. In the long run, these bitter sentiments should pacify over time.