The world felt ‘the aftershocks’ 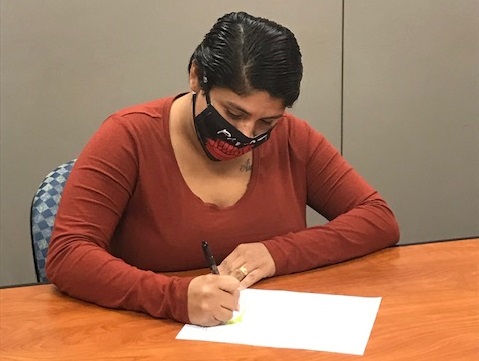 Alejandra Hernandez won first prize for her essay, "The Aftershocks."

The contest was open to all HCC Plant City students. Essays were judged by three professors: Dr. William Mellon, Dr. Thelma Miller-Anderson and Ms. Evie D’Amico. There was also a voter’s choice award.

Alejandra Hernandez won first place and received a $100 gift card to the HCC bookstore. The second-place prize of a $50 HCC Bookstore went to Ashley Buckner. Camryn Wink won a $25 gift card to the bookstore for winning third place. The voter’s choice winner was Ajia Mullins, who received $75.

Reid said the contest was intended to increase awareness, promote understanding and engage students in a discussion to help foster diversity and inclusion within the college community.

This year’s topic was about students’ reactions to events that followed the May 25, 2020, death of George Floyd. Essays were to address if people’s reactions were riots, protests, or demonstrations. They also were to say if they addressed systemic racism or if they were merely looting and acts of violence. Finally, the essays could say of what happened was either necessary or unproductive.

Hernandez’s essay is titled “The Aftershocks.” She uses many instances of giving her opinion in the first person. This was encouraged. One of the criteria was “Voice & Originality: the writer uses a highly engaging personal style to explore the topic.”

Her essay talks not just about what happened to Floyd. She names other people who have lost their lives due to discrimination and racism.

Trayvon Martin was killed by George Zimmerman in Sanford, Fla., because Zimmerman thought he looked suspicious.

Ahmaud Arbery, an African American male, was jogging through a Georgia neighborhood when three white men hunted him down and murdered him because they thought he was a suspect in a series of break-ins.

Hernandez points out that many unarmed African Americans are killed by law enforcement. She talks about Breonna Taylor, the 26-year-old emergency medical technician who was shot multiple times in her home after police executed a no-knock warrant. In her essay, she says a bill that banned chokeholds and no-knock warrants was put into place because of the Floyd and Taylor incidents.

In the essay, Hernandez says the demonstrations started peacefully with a “powerful message behind them,” but that too many of them turned violent.

“It saddened me,” Hernandez said. “I understood the pent-up frustration, [but] once those protests turned into violent riots it defeated the purpose.”

Hernandez ended her essay hoping that change would come due to the light shone on systemic racism and that people will care more about people’s lives. Her final sentence was, “the world felt the aftershocks of this life lost.”